Ziziphus is a genus of about 40 species of spiny shrubs and small trees in the buckthorn family, Rhamnaceae, distributed in the warm-temperate and subtropical regions throughout the world. The leaves are alternate, entire, with three prominent basal veins, and 2–7 cm (0.79–2.76 in) long; some species are deciduous, others evergreen. The flowers are small, inconspicuous yellow-green. The fruit is an edible drupe, yellow-brown, red, or black, globose or oblong, 1–5 cm (0.39–1.97 in) long, often sweet and sugary, reminiscent of a date in texture and flavor. 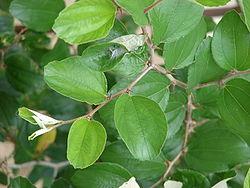 Ziziphus fruit is eaten fresh or dried and candied. It is applied to make a tea syrup, a juice and a vinegar. In China, the jujubes from the tree are made into a wine or used in cooking. The fruit is also used as a coffee substitute. In Chinese weddings, jujubes were placed with walnuts in the bridal chamber to promote fertility. In Korea, the wood is used to make a double-reed wind instrument called a taepyongso.

Internally Ziziphus is taken to relieve stress and encourage sleep. It also purifies the blood and helps a person gain weight, improve muscular strength and build stamina. It is also given as a liver tonic. This herb improves the immune system’s resistance to infection.

The herb is often prescribed to treat anemia, bronchitis, pharyngitis, diarrhea, fatigue, loss of appetite, irritability and hysteria. The seed is used to treat insomnia, nervous exhaustion, night sweats, palpitations and excessive perspiration. The root has been used to treat ulcers, while the leaves are used to treat fever from smallpox, chickenpox and measles.

It is frequently prescribed when one has restless sleep, disturbing dreams, anxiety, forgetfulness, concentration problems and emotional disorders. The fruit is used for coughs, congestion, as a diuretic and to soothe the internal organs.

Externally the bark can make an eyewash to use for inflammation.