Tragacanth is a natural gum obtained from the dried sap of several species of Middle Eastern legumes of the genus Astragalus, including A. adscendens, A. gummifer, A. brachycalyx and A. tragacanthus. Some of these species are known collectively under the common names “goat’s thorn” and “locoweed”. The gum is sometimes called shiraz gum, shiraz, gum elect or gum dragon. The name derives from tragos and akantha, which means in Greek “goat” and “thorn”, respectively. Iran is the biggest producer of the best quality of this gum.

Tragacanth is a viscous, odorless, tasteless, water-soluble mixture of polysaccharides obtained from sap which is drained from the root of the plant and dried. The gum seeps from the plant in twisted ribbons or flakes which can be powdered. It absorbs water to become a gel, which can be stirred into a paste.

Gum tragacanth is less common in products than other gums, such as gum arabic or guar gum, largely because most tragacanth is grown in Middle Eastern countries which have shaky trade relations with countries where the gum is to be used. Commercial cultivation of tragacanth plants has generally not proved economically worthwhile in the West, since other gums can be used for similar purposes.

Gum tragacanth is also used in incense-making as a binder to hold all the powdered herbs together. Its water solubility is ideal for ease of working and an even spread. Only half as much is needed, compared to gum arabic or something similar. 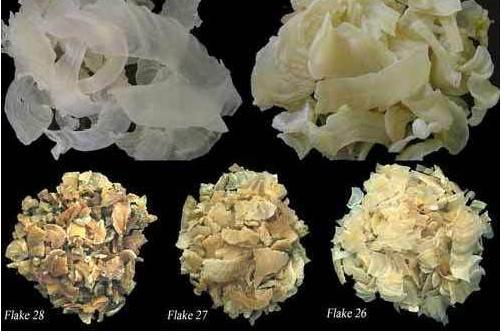 The uses of gum tragacanth depend on its action as an effective emulsifying and suspending agent with a long shelf life and stability to heat and acidity.

Salad Dressings: Because of its relative stability to heat, acidity and aging, gum tragacanthe is used as a thickener and stabilizer in pourable salad dressings of the regular and low calorie types.

Sauces And Condiments: Used for stabilization and emulsification as well as acid resistance and long shelf life.

Bakery Emulsion And Toppings: Used as an emulsifier and thickening agent. In fruit fillings it is used as a thickener or suspending agent and forms a creamy filling with good shine, transparency and long shelf life.

Flavor Syrups: Used to increase viscosity and provide a mixture, which is stable and is used in most preparations of flavor oil with water.

Confectionery: Used as a binder in the manufacturing of candy cigarettes and lozenges.

Cosmetics: Used as a suspending agent in various toothpaste to form a creamy and brilliant product.  Its long shelf life and film forming properties make it useful in hair lotions hand lotions and creams.

1- Ceramics :Used as a binder and acts as a suspending agent prior to the firing of the ceramic in the furnace.

2- Polishers :Used in the manufacturing of certain types of emulsion polishes for furniture, floor and automobiles.

CIGARS used as an adhesives for reconstituted cigar wrapper leaves.

Tragacanthe is used both for diarrhea and constipation.

It is also an ingredient in toothpastes, hand lotions, denture adhesives and jellies.

In foods, tragacanth is important for stabilizing and thickening ingredients in salad dressings, foods, and beverages.

In pharmaceutical products, tragacanth is used as a binding agent.

Tragacanth contains ingredients that stimulate the movement of the human intestines.