Sophora is a genus of about 45 species of small trees in the pea family Fabaceae. The species are native to southern Asia, Australasia, various Pacific islands, western South America, the western United States Puerto Rico. The generic name is derived form an Arabic name for a pea-flowered tree. 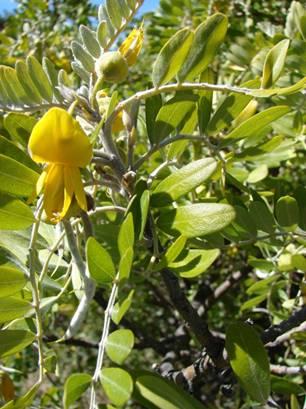 The Toromiro (Sophora toromiro) was a common tree in the forests of Easter Island. The tree fell victim to the deforestation that eliminated the island’s forests by the 18th century, and then became. The tree is being reintroduced to the island in a scientific project partly led jointly by the Royal Botanic Gardens, Kew and the Göteborg Botanical Garden, where the only remaining plants of this species with a documented origin were propagated in the 1960s from seeds collected by Heyerdahl.

Matrine is an effective antiarrthymic; it slows the heart rate, increases cardiac conduction. It directly inhibited artrial muscle reduced the maximal driving frequency. which is one of the main components extracted from Sophora flavescens, has displayed anti-cancer activity. It promotes hair growth, possibly due to 5-alpha-reductase inhibitory activity. Sophorae injection can reduce the toxicity and adverse effects caused by chemotherapy. It is anti-inflammatory and an antioxidant.
Anti-atherosclerosis may be an effective cholesterol-lowering agent and useful for preventing hypercholesterolemic atherosclerosis.
Sophora flavescens may have the potential for treatment of chronic inflammatory disorders.
A mixture of Sophora flavescens and licorice (Glycyrrhiza glabra) gave better liver protective and anti-hepatocarcinogenic effects than licorice or Sophora alone. In addition, glycyrrhiza + sophora had a protective effect on immunosuppression, a strong non-specific anti-inflammatory effect, and reduced the incidence of sodium and water retention.
Sophora flavanone G obtained from Sophora flavescens was evaluated against more than 10 clinical isolates of methicillin-resistant Staphylococcus aureus