The common myrtle (M. communis) is native to the Mediterranean region and the Middle East and is cultivated in southern England and the warmer regions of North America.

The plant may grow more than 5 m high. The opposite leaves are thick and lustrous, with many small, translucent, oil-bearing glands. The solitary white flowers, about 1.8 cm  long, are borne on short stalks. The fruit is a purplish black, many-seeded berry.

Variegated, yellow-fruited, and also white-fruited varieties of the common myrtle are cultivated for ornament. Other plants known as myrtles are wax myrtle, bog myrtle (or sweet gale), crape myrtle, sand myrtle, gum myrtle, downy myrtle, and the mountain laurel of Oregon and California, the wood of which is often sold as “myrtle.” 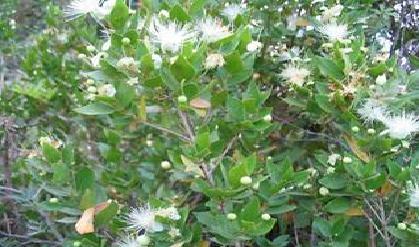 In Greek mythology and ritual the myrtle was sacred to the goddesses Aphrodite. Artemidorus asserts that in interpreting dreams “a myrtle garland signifies the same as an olive garland, except that it is especially auspicious for farmers. Pausanias explains that one of the Graces in the sanctuary at Elis holds a myrtle branch because “the rose and the myrtle are sacred to Aphrodite and connected with the story of Adonis. Myrtle is the garland of Iacchus, according to Aristophanes, and of the victors at the Theban Iolaea, held in honour of the Theban hero Iolaus.

At the Veneralia, women bathed wearing crowns woven of myrtle branches, and myrtle was used in wedding rituals. In the Aeneid, myrtle marks the grave of the murdered Polydorus in Thrace. Aeneus’ attempts to uproot the shrub cause the ground to bleed, and the voice of his dead brother warns him to leave. The spears which impaled Polydorus have been transformed into the myrtle which marks his grave.

In the Mediterranean, myrtle was symbolic of love and immortality. In their culture the plant was considered an essential plant.

In several countries, particularly in Europe, there has been a tradition for prescribing this substance for sinus infections. A systematic review of herbal medicines used for the treatment of rhinosinusitis concluded that the evidence that any herbal medicines are beneficial in the treatment of rhinosinusitis is limited, and that for Myrtus there is is not enough data to verify the significance of clinical results.