Matricaria is a genus of flowering plants in the Chamomile tribe within the sunflower family. Some of the species have the common name of “mayweed,” but this name also refers to plants not in this genus.
Most are very common in the temperate regions of Europe, Asia, and America. Matricaria occidentalis is native to North America; other species have been introduced there.
These are hardy, aromatic annuals, growing along roadsides in ruderal communities and in fallow land rich in nutrients. Though many are considered nuisance weeds, they are suitable for rock gardens and herb gardens, and as border plants.
Their many-branched stems are prostrate to erect, glabrous, and very leafy. Their bipinnate leaves have numerous linear, lobed leaflets. 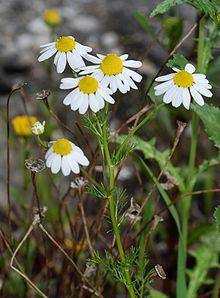 Shakespeare refers in part I of Henry IV to the not-flowering variety of Chamomile that will grow better the more one walked on it. Moreover, in English there is a proverb about flexibility when there is misfortune: “As a Chamomile meadows”, the more it gets stepped on, the too more it spreads itself.
Ones one sat on beds of this Chamomile species, because of the pleasant smell and to lighting of the pain of piles. In a popular garden book from 1638, William Lawson wrote about the big walk ways, broad and long (as the saint forests in Thessalié) raised with pebbles and sand, with seats and benches of Chamomile, all together this lightens the mind and heals the human body.

Matricaria species are used as food plants by the larvae of some Lepidoptera species (caterpillars) including Lime-speck Pug.

The extract of Matricaria recutita is taken as a strong tea. It has been used in herbal medicine as a carminative and anti-inflammatory. It is also used in ointments and lotions, and as a mouthwash and gums. Aromatherapy uses two essential oils of chamomile: the “true chamomile” oil (from M. recutita) and the Roman chamomile oil (from Chamaemelum nobile).

As medicines, the flower heads and the ethereal oil both are used. It is bactericide, inflammations brake, wound whole, anti-allergic, cramp defence, calming, comforting, softening, stomach means, decongestive and digestive tonic.
It is useful for skin problems, lit wounds, swear, eczema, dyspepsia (disturbed digestion), stomach and intestine sore, bladder inflammation, menstruation disturbances (irregular, staying away).
it is useful for fire wound, freeze wounds, blisters, eczema, rheumatism, ear pain, acne, nsect bites, sores, little appetite, headache, skin problems, menstruation complaints, arthritis, sprains, muscle pain, gout, nerve pain, boils, allergies, migraine, nervousness, stress, transitions complaints, excitability, insomnia, fear, stress, tooth pain and digestions disturbances.
The Chamomile flower is therapeutic, healing, heating, calming and soothing, but never cheerful. Also is the good for children that pains have, anxious or irritable be.
Chamomile can be used about that as a tea against stomach-ache, in gargle drink and as a mouth rinse. it is also used in inhalations for asthma.
Chamomile is reach in alpha-Bisabolol, that promotes granulation and tissue regeneration as a natural anti-inflammatory compound. Due to the inhibition of histamine release, anti-free radical action and inhibition of the super oxide radical synthesis is key. When using a chamomile based product, you might notice a decrease in irritation and inflammation, making for calmer, clearer skin.