Althaea officinalis (marsh-mallow, marsh mallow, or common marshmallow) is a perennial species which is used as a medicinal plant and ornamental plant. A confection made from the root since ancient Egyptian time evolved into today’s marshmallow treat. The stems, which die down in the autumn, are erect, 3 to 4 ft (0.91 to 1.22 m), simple, or putting out only a few lateral branches. The leaves, shortly petioled, are roundish, ovate-cordate, 2 to 3 in (51 to 76 mm) long, and about 11⁄4 inch broad, entire or three to five lobed, irregularly toothed at the margin, and thick. They are soft and velvety on both sides, due to a dense covering of stellate hairs. The flowers are shaped like those of the common mallow, but are smaller and of a pale colour, and are either axillary, or in panicles, more often the latter.
The stamens are united into a tube, the anthers, kidney-shaped and one-celled. The flowers are in bloom during September, and are followed, as in other species of this order, by the flat, round fruit which are popularly called “cheeses”.
The common mallow is frequently called “marsh mallow” by country people, but the true marsh mallow is distinguished from all the other mallows growing in Britain by the numerous divisions of the outer calyx, by the hoary down which thickly clothes the stems and foliage, and by the numerous panicles of blush-coloured flowers, paler than the common mallow.
The entire plant, particularly the root, abounds with a mild mucilage, which is emollient to a much greater degree than the common mallow. The generic name, Althaea, is derived from the Greek “ἄλθειν” (to cure), from its healing properties. The name of the family, Malvaceae, is derived from the Greek “μαλακός” (soft; Latin “mollis”), from the special qualities of the mallows in softening and healing. 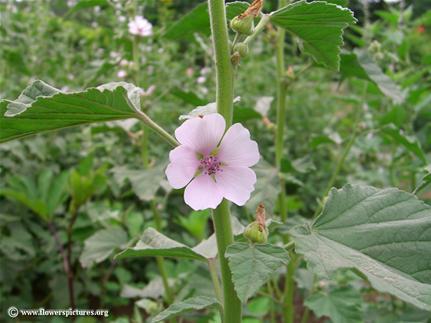 Marshmallow probably came first into being as a medicinal substance, since the mucilaginous extracts come from the root of the marshmallow plant, Althaea officinalis, which were used as a treatment for sore throats. Concoctions of other parts of the marshmallow plant had medical purposes as well.The root has been used since Egyptian antiquity in a honey-sweetened confection useful in the treatment of sore throat.[1] The later French version of the recipe, called pâte de guimauve (or “guimauve” for short), included an egg white meringue and was often flavored with rose water.
The use of marshmallow to make a sweet dates back to ancient Egypt, where the recipe called for extracting sap from the plant and mixing it with nuts and honey. Another pre-modern recipe uses the pith of the marshmallow plant, rather than the sap. TThe marshmallow plant’s sap was also used by gladiators in ancient Rome. The sap was rubbed on the body in preparation for the fight. Confectioners in early 19th century France pioneered the innovation of whipping up the marshmallow sap and sweetening it, to make a confection similar to modern marshmallow. The confection was made locally, however, by the owners of small sweet shops. They would extract the sap from the mallow plant’s root, and whip it themselves. The candy was very popular, but its production was labour-intensive. In the late 19th century, French manufacturers thought of using egg whites or gelatin, combined with modified corn starch, to create the chewy base. This avoided the labour-intensive extraction process, but it did require industrial methods to combine the gelatin and corn starch in the right way.
Another milestone in the development of the modern marshmallow was the extrusion process by the American Alex Doumak in 1948.

Marshmallow is widely known as an excellent treatment for sore throats, dry coughs, laryngitis and bronchitis.
This is good news for anyone who needs to use their voice a lot in their work. Speakers, actors, singers on so on might want to consider drinking marshmallow tea every now and again.
Marshmallow is good for your immune system. This herb will stimulate the production of white blood cells.
The white blood cells are of vital importance and fight infections.
People with dry skin may benefit from drinking marshmallow tea. Marshmallow assists in fighting cellular aging. Some refer to it as the anti-aging herb.
Marshmallow helps stimulate the flow of breast milk in nursing mothers.
Externally powered root made into a paste by adding water may be used to relieve discomforts from insect bites. Many report good results when adding a dash of flax and lavender oil to the marshmallow paste and applying on sunburns.