Hyssopus officinalis or hyssop is a herbaceous plant of the genus Hyssopus which is native to Southern Europe, the Middle East, and the region surrounding the Caspian Sea in Iran. Due to its properties as an antiseptic, cough reliever, and expectorant, it is commonly used as an aromatic herb and medicinal plant. 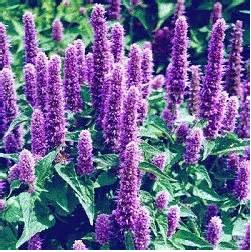 A plant called hyssop has been in use since classical antiquity. The Hebrew word אזוב (esov or esob) and the Greek word ὕσσωπος probably share a common (unknown) origin. The name hyssop appears in some translations of the Bible, notably in verse 7 of Psalm 51. Hyssop was also used for purgation in Egypt, where, according to Chaeremon the Stoic, the priests used to eat it with bread in order to purify this type of food and make it suitable for their diet. Researchers have suggested that the Biblical accounts refer not to the plant currently known as hyssop but rather to one of a number of different herbs.

It is Expectorant, diaphoretic, stimulant, pectoral, carminative. The healing virtues of the plant are due to its particular volatile oil, which is stimulative, carminative and sudorific. It admirably promotes expectoration, and in chronic catarrh its diaphoretic and stimulant properties combine to render it of especial value. It is usually given as a warm infusion and mixed with Horehound. Hyssop Tea is also a grateful drink, well adapted to improve the tone of a feeble stomach, being brewed with the green tops of the herb, which are sometimes boiled in soup to be given for asthma. In America, an infusion of the leaves is used for the relief of muscular rheumatism, and also for bruises and discoloured contusions, and the green herb, bruised and applied, will cure cuts promptly. The infusion has an agreeable flavour and is used by herbalists in pulmonary diseases. A tea made with the fresh green tops, and drunk several times daily, is one of the oldfashioned country remedies for rheumatism. Hyssop baths have also been recommended as part of the cure, but the quantity used would need to be considerable. Hyssop is used for digestive and intestinal problems including liver and gallbladder conditions, intestinal pain and loss of appetite. It is also used for respiratory problems including coughs, the common cold, respiratory infections, sore throat, and asthma.
Other uses include urinary tract infection (UTI), poor circulation, HIV/AIDS, and menstrual cramps.