Borage (Borago officinalis), also known as a starflower, is an annual herb which is native to the Mediterranean region and has naturalized in many other locales. It grows satisfactorily in gardens in the UK climate, remaining in the garden from year to year by self-seeding. The leaves are edible and the plant is grown in gardens for that purpose in some parts of Europe. The plant is also commercially cultivated for borage seed oil which is extracted from its seeds.

Borage is actually a somewhat gangly plant, but you rarely notice it because the star-shaped flowers are so vibrant. They’re a true blue, hanging in downward facing clusters. Even the fuzzy white buds are attractive. Both the flowers and the leaves are edible, with a cucumber-like flavor. Use the leaves while they are young, because as the plant matures, the stalks and leaves become covered with a prickly fuzz. 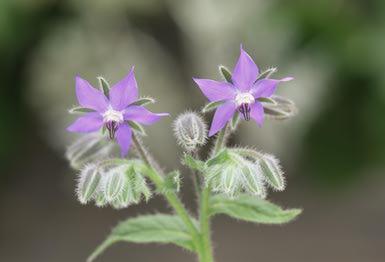 In the early part of the nineteenth century, the young tops of Borage were still sometimes boiled as a pot-herb, and the young leaves were formerly considered very good in salads.

The fresh herb has a cucumber-like fragrance. When steeped in water, it imparts a coolness to it and a faint cucumber flavour, and compounded with lemon and sugar in wine, and water, it makes a refreshing and restorative summer drink. It was formerly always an ingredient in cool tankards of wine and cider, and is still used in claret cup.

Our great grandmothers preserved the flowers and candied them.

Borage was sometimes called Bugloss by the old herbalists, a name that properly belongs to Anchusa officinalis, the Alkanet, the Small Bugloss being Lycopsis arvensis, and Viper’s Bugloss being the popular name for Echium vulgare.

Some authorities consider that the Latin name Borago, is a corruption of corago, from cor, the heart, and ago, I bring, because of its cordial effect.

In all the countries bordering the Mediterranean, where it is plentiful, it is spelt with a double ‘r,’ so the word may be derived from the Italian borra, French bourra, signifying hair or wool, words which in their turn are derived from the Low Latin burra, a flock of wool, in reference to the thick covering of short hairs which clothes the whole plant.

Those of our time do use the flowers in sallads to exhilerate and make the mind glad. There be also many things made of these used everywhere for the comfort of the heart, for increasing the joy of the minde. The leaves and floures of Borage put into wine make men and women glad and merry and drive away all sadnesse, dulnesse and melancholy, as Dios corides and Pliny affirme. Syrup made of the floures of Borage comforteth the heart, purgeth melancholy and quieteth the phrenticke and lunaticke person.

According to Dioscorides and Pliny, Borage was the famous Nepenthe of Homer, which when drunk steeped in wine, brought absolute forgetfulness.

Borage is much usedin France for fevers and pulmonary complaints. By virtue of its saline constituents, it promotes the activity of the kidneys and for this reason is employed to carry off feverish catarrhs. Its demulcent qualities are due to the mucilage contained in the whole plant. For internal use, an infusion is made of 1 OZ of leaves to 1 pint of boiling water, taken in wineglassful doses. Externally, it is employed as a poultice for inflammatory swellings.