Asafoetida is the dried latex  exuded from the rhizome or tap root of several species of Ferula, a perennial herb that grows 1 to 1.5 m tall. The species is native to the deserts of Iran. As its name suggests, asafoetida has a fetid smell but in cooked dishes it delivers a smooth flavor reminiscent of leeks.
It is also known as asant, food of the gods, jowani badian, stinking gum, Devil’s dung, hing and ting.
A coarse umbelliferous plant growing up to 7 feet high, large fleshy root covered with bristly fibres, has been for some time successfully cultivated in Edinburgh Botanical Gardens; stem 6 to 10 feet, numerous stem leaves with wide sheathing petioles; flowers pale greeny yellow, fruit oval, foliaceous, reddish brown with pronounced vittae, it has a milky juice and a strong foetid odour; was first found in the sandy desert of Aral in 1844, but has been known since the twelfth century. Several species of Ferula yield Asafetida.These high plains are arid in winter but are thickly covered in summer with a luxuriant growth of these plants. The great cabbage-like folded heads are eaten raw by the natives. June is the month the juice is collected from plants about four years old. The roots of plants which have not flowered are exposed and slashed, then shaded from the sun for six weeks and left for the gummy oleoresin to leak out and harden. It is then scraped off in reddish lumps and put into leather bags and sent to Herat, where it is adulterated before being placed on the market. The fruit is sent to India for medicinal use. A very fine variety of Asafetida is obtained from the leaf bud in the centre of the root which is only used in India, where it is known in the Bazaars as Kandaharre Hing. It appears in reddish-yellow flakes and when squeezed gives out an oil. 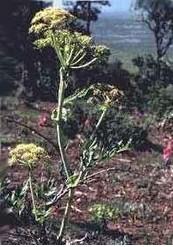 It is useful for Bait: John C Duval reported in 1936 that the odor of asafoetida is attractive to the wolf, a matter of common knowledge, he says, along the Texas/Mexico border. It is used as one of several possible scent baits, most notably for catfish and pike.
May also be used as a moth (Lepidoptera) light trap attractant by collectors when mixed by approximately 1 part to 3 parts with a sweet, fruit jelly.
It is also useful for Repelling spirits: In Jamaica, asafoetida is traditionally applied to a baby’s anterior (Jamaican patois mole) to prevent spirits from entering the baby through the fontanel. In the African-American tradition, asafoetida is used in magic spells, as it is believed to have the power both to protect and to curse.

The odour of Asafetida is stronger and more tenacious than that of the onion, the taste is bitter and acrid; the odour of the gum resin depends on the volatile oil. It is much used in India and Persia as a condiment and is thought to exercise a stimulant action on the brain. It is a local stimulant to the mucous membrane, especially to the alimentary tract, and therefore is a remedy of great value as a carminative in flatulent colic and a useful addition to laxative medicine. There is evidence that the volatile oil is eliminated through the lungs, therefore it is excellent for asthma bronchitis, whooping-cough, etc. Owing to its vile taste it is usually taken in pill form, but is often given to infants per rectum in the form of an emulsion.