Achillea millefolium, known commonly as yarrow or common yarrow, is a flowering plant in the family Asteraceae. It is native to regions of the Northern Hemisphere in Asia, Europe, and North America. In New Mexico and southern Colorado, it is called plumajillo  from its leaf shape and texture. In antiquity, yarrow was known as herbal militaris, for its use in staunching the flow of blood from wounds. Other common names for this species include gordaldo, nosebleed plant, old man’s pepper, devil’s nettle, sanguinary, milfoil, soldier’s woundwort, thousand-leaf, and thousand-seal. Achillea millefolium is an erect herbaceous perennial plant that produces one to several stems 0.2–1 metre (0.66–3.28 ft) in height, and has a spreading rhizomatous growth form. Leaves are evenly distributed along the stem, with the leaves near the middle and bottom of the stem being the largest. The leaves have varying degrees of hairiness (pubescence). The leaves are 5–20 cm long, bipinnate or tripinnate, almost feathery, and arranged spirally on the stems. The leaves are cauline, and more or less clasping.

The plant has a strong, sweet scent, similar to chrysanthemums. 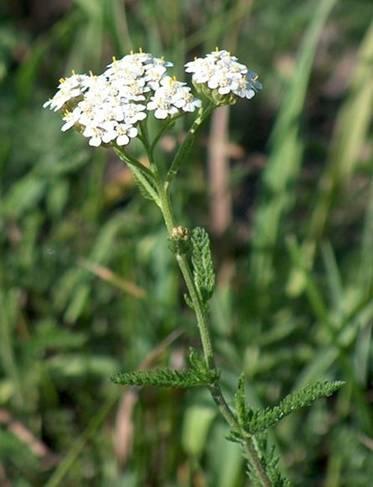 Yarrow has been revered as a powerful healing herb and magical plant for centuries. It was used in counter-magical practices to ‘drive out the devil’ of those who had become possessed. However, to be effective, the holy mass had to be recited over the herb 7 times and it also had to be drunk from an upside down church bell (!). The French name for this herb ‘herbe de St. Joseph’ is derived from a legend according to which Joseph one day hurt himself while working on his carpentry. The infant Jesus brought him some Yarrow, which instantly staunched the bleeding.

In China, Yarrow is also used for divination however, the practice is of quite a different order. The ancient oracle of the I Ching is traditionally cast with Yarrow stalks which are thought to represent the Yin and Yang forces of the Universe in perfect balance.

Yarrow was always part of the sacred 9 herb bundle. Originally a pre-Christian tradition, the church at first attempted to ban the herbs. But when it became apparent that this would be impossible to enforce, they sanctified the practice and even blessed the women’s herb bundles in the church on Maria Ascension day, the 15th of August.

This is one the world’s oldest medicinal plants. It goes by many names: Bloodwort, Carpenter’s weed, Milfoil, and Soldier’s woundwort.  Wort is an old English word meaning “plant” or “herb”. Yarrow leaves have been used since ancient times on wounds as cuts and inflammation. Yarrow is known to stop any bleeding from a wound quickly. Take a few of the leaves and chew them slightly without swallowing the juice. Put them on the bleeding wound. This should help stop the bleeding. Yarrow leaves have been used in many battlefields to treat injured people. That is how that plant received the nickname “Soldier’s woundwort. You can also wash the wound with yarrow tea to thoroughly clean the wound before adding a bandage. Yarrow tea is famous for its qualities as a fever reducer. Drinking the tea to fight fever is said to be quite effective.Yarrow leaves can be used as an insect repellent. Rub some yarrow leaves on your skin when you are out hiking.

Yarrow is a very useful medicinal herb. Internally, Yarrow acts as a soothing relaxant on the voluntary nervous system. It counteracts cramps and spasm of the stomach, abdomen and uterine system. At the same time, its bitter principles support the digestive system by acting on the gallbladder and liver. Yarrow also supports the urinary system and is an effective anti-inflammatory and diuretic in cases of urinary infections. It is an excellent women’s herb that can bring on delayed menstruation, soothe painful periods and menstrual cramps and reduce excessive bleeding. The fresh juice is recommended as a tonic. Yarrow improves peripheral circulation by dilating the blood vessels. It is indicated for high blood pressure and angina pectoris. It is also one of the best herbs to induce a cooling sweat to reduce fevers. It can be used for inner cleansing, e.g. prior to a sauna or sweatlodge. Yarrow’s overall cleansing and toning properties, combined with its anti-inflammatory action may explain its use in the treatment of rheumatism.